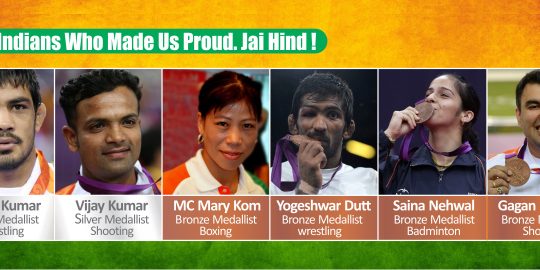 The 2012 London Olympics saw an 83 member Indian contingent participating in the games is the most successful Olympics ever for India in terms of the total medals won by India at an Olympic game. This Olympics also saw the largest ever contingent from India participating in the games i.e 55 events. The first medal of the London Olympics for India was won by Gagan Narang in the 10m air rifle. [1] This is the first event where India has won 2 medals (second event Men’s Frestyle 66 kg). The second medal of the London Olympics was won by Vijay Kumar in 25 meter rapid fire pistol. [2] The third medal was won by Saina Nehwal in the Women’s Singles Event in Badminton. The fourth medal has been won by Mary Kom in the Women’s Flyweight (51 kg). The fifth medal has been won by Yogeshwar Dutt in the Men’s Wrestling Freestyle (60 kg) Category. The sixth medal has been won by Sushil Kumar in the Men’s Wrestling Freestyle (66 kg) Category. He is the first Indian to win 2 Olympic medals since Norman Pritchard (who won two hurdles medals for British India) and also the first to win 2 medals in the same category.

It took us a lot of time and effort to collect all the data and compile it in an infographics format. There were some interesting facts which were revealed on the completion hope you like and enjoy them.

A tribute to the Indian Olympics 2012 Contingent.

An Infographics on History of Social Media Advertising
August 7, 2013

Introducing the Google Databoard: A new way to explore research and create your own infographics
July 10, 2013

Colors and Fonts That Drive the Leading Brands of the World
June 7, 2013